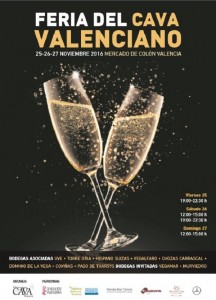 Valencians embrace their cellar in the Mercado de Colón

+ The contest that has started today continues until next Sunday at noon.

+ The prestigious chef Ricard Camarena receives the title of Ambassador of Cava Valenciano.

Just a few hours ago, the fourth edition of the Valencian Cava Fair began in the Mercado de Colón with an emotional event in which José Hidalgo, president of the Association, thanked everyone, institutions and companies that have done it. posible.

The official act has also served to deliver chef Ricard Camarena his title of ambassador of the Valencian cava, in which he takes the witness of Cuchita Lluch, one of the people who has worked the most for Valencian gastronomy.

In his speech, Hidalgo recalled how “safe the quality and versatility of our cavas, a couple of years ago we went to visit Ricard to consider the possibility of bringing their kitchen to the Valencian cellars and develop a gastronomic workshop that harmonized the high cook with our cavas. He, «crashed» and «trisolate», could have taken refuge in his condition of «first sword» to decline the invitation, but far from excusing himself he gave us all his support and got involved to the point of creating a fantastic menu that helped to give notoriety to our cavas “. In addition, the president of the processors added that “Being able to link the kitchen of Ricard Camarena to Valencian cavas has been one of the best contributions to the promotion of our products in recent years.”

The opening day was a resounding success for the public. And is that for the edition held in the same enclave during the last three years have already passed more than 20,000 Valencians. With these precedents the event has been consolidated as a fixed appointment of the Valencian society with its cellars in an incomparable setting of the city of Valencia. The fourth edition of the Cava Valenciano Fair will be held between November 25 and 27 at the Mercado de Colón in Valencia.

The operation of the event maintains its ticket and tasting system for 10 euros, which entitles two tastings of cava reserva and two of cava and a gastronomic tasting. This year a ticket of 8 euros is added with a tasting of cava reserva, one of cava and one gastronomic. The fair is structured in four sessions. Friday afternoon, from 7:00 pm to 10:30 pm; Saturday, from 12:00 to 15:00 and from 19:00 to 22:30 and Sunday from 12:00 to 15:00.

In gastronomic matters, the event will feature contributions from some of the firms installed in the Mercado de Colón, such as Martin & Mary, Las Cervezas del Mercado, Ma Khin Café, Pantalan5 and Suc de Lluna.

During the contest, two gastronomic workshops will be held. Saturday afternoon will be Iván Talens, from Mésquebarmans, who will perform a cocktail demonstration with Valencian cava. It will last one hour and start at 6:30 p.m. On Sunday morning it will be the turn of the showcooking at Ma Khin Café, led by chef Stephen Anderson. The price of the cocktail workshop is 25 euros and the gastronomy price is 45 euros. Being the capacity of 20 people in each of the cases. To reserve a place in the workshops you can send an email to feria.cavavalenciano@gmail.com, indicating your mobile phone.

This year the Cava Valenciano Fair has the sponsorship of the Generalitat Valenciana and the Provincial Council of Valencia, Mercedes-Benz Valencia and AGROVIN, as well as the invaluable collaboration of the Mercado de Colón and Proava.

Any cookies that may not be particularly necessary for the website to function and is used specifically to collect user personal data via analytics, ads, other embedded contents are termed as non-necessary cookies. It is mandatory to procure user consent prior to running these cookies on your website.